To share your memory on the wall of Tristin Butler, sign in using one of the following options:

Provide comfort for the family of Tristin Butler with a meaningful gesture of sympathy.

He was born August 21, 2004 in Yakima, Washington to James Butler Sr. and Michelle Perkins.

TJ loved anything he could do in and on water, playing hide and go seek and slug bug. He was a football player on the Ross Beatty Junior Varsity Football Team. He had an infectious smile and had a passion for Halloween. TJ adored his numerous nieces and nephews. He affectionately called his mother “Madre” and was the sunshine of her life. TJ will be missed tremendously by everyone he came in contact with.

Family and friends will gather Thursday, November 14, 2019 from 4:30 p.m. to 8:30 p.m. for a time of telling stories and sharing memories in the Gymnasium of Ross Beatty High School, 22721 Diamond Cove Street, Cassopolis.

TJ’s remains will be laid to rest in West Hills Memorial Park in Yakima, Washington.

We encourage you to share your most beloved memories of Tristin here, so that the family and other loved ones can always see it. You can upload cherished photographs, or share your favorite stories, and can even comment on those shared by others. 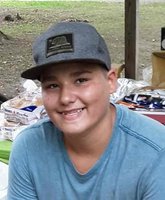