To share your memory on the wall of Ruth Cowham, sign in using one of the following options:

Provide comfort for the family of Ruth Cowham with a meaningful gesture of sympathy.

Print
Ruth Irene Cowham, age 91, of Cassopolis, died peacefully Friday, May 8, 2020 in the comfort of her family’s presence, just three days before her 92nd birthday.

She was born May 11, 1928 in Three Rivers, Michigan, the third of six chi... Read More
Ruth Irene Cowham, age 91, of Cassopolis, died peacefully Friday, May 8, 2020 in the comfort of her family’s presence, just three days before her 92nd birthday.

She was born May 11, 1928 in Three Rivers, Michigan, the third of six children of David and Leona Yoder. She married Maynard Dean Cowham October 16, 1954 in Cassopolis, Michigan. After more than forty-eight years of marriage he preceded her in death in 2003.

In addition to her husband, she was preceded in death by her parents; two sisters, Helen Waldo, Betty Woods; two brothers, Richard Yoder, George Yoder; one son in law, Patrick Fox; one sister in law, Doris Yoder; and three brothers in law, Murray Waldo, Bill Woods, and David Dunn.

Mrs. Cowham will be laid to rest beside her beloved husband in Crane Cemetery in Volinia Township following a graveside service.

The family prefers contributions in memory of Ruth be made to Cass County Medical Care Facility, 23770 Hospital Street, Cassopolis, Michigan 49031.

Receive notifications about information and event scheduling for Ruth

We encourage you to share your most beloved memories of Ruth here, so that the family and other loved ones can always see it. You can upload cherished photographs, or share your favorite stories, and can even comment on those shared by others. 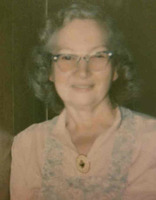