To share your memory on the wall of Rosemary Flinn, sign in using one of the following options:

Rosemary was born December 26, 1929 in Hinsdale, Illinois to Andrew and Marjorie Jaicks. She graduated from Walnut Hill Boarding School in Natick, Massachusetts and began her freshman year at Smith College in the class of 1951. After graduation, Rosemary moved to New York City with several of her close college roommates. It was there she met the love of her life, George Macdonald Flinn. They were married on February 11, 1956 at the Union Church in Hinsdale and lived in the New York suburb of Scarsdale until retiring to Lakeside in the late ‘90s. After 56 years of marriage he preceded her in death on May 24, 2012.

A loving mother and homemaker, Rosemary was first and foremost a people person – often saying that people were “her hobby.” She loved visiting with friends and family and discussing everything from current world events to the local news to the latest football score of her beloved Bears. She was an avid reader who began each day reading the New York Times cover to cover with her morning coffee and had at least 2-3 other books throughout the house in various stages of completion. Having long ago hung up her golf clubs and tennis racket, she relished her weekly bridge games and the new friends she met as a result.

Rosemary will be greatly missed by family and friends. She is survived by one daughter, Susan Flinn Cobian (Randy) of Lakeside; two sons, Andrew Macdonald Flinn of Pasadena, California, Ross Gillies Flinn of Lakeside; two grandchildren, Jasper Macdonald Flinn and Cara Elsa Flinn; and a host of nieces, nephews, cousins, and friends. Along with her parents and husband, Rosemary was preceded in death by one sister, Eleanor Jaicks Greenleaf; and one brother, Frederick Gillies Jaicks.

Family and friends will gather for a celebration of Rosemary’s life on Sunday, October 13th at 11:00 AM EST (Michigan time) at Chikaming Country Club, 15029 Lakeside Road, Lakeside, Michigan.

Receive notifications about information and event scheduling for Rosemary

We encourage you to share your most beloved memories of Rosemary here, so that the family and other loved ones can always see it. You can upload cherished photographs, or share your favorite stories, and can even comment on those shared by others.

Posted Oct 21, 2019 at 12:00am
My sister Nancy Oostenbrug Roggen and I visited Rosemary at her home just after Labor Day. Though gj she was recovering from a hospital stay, she was as sharp and engaged as ever. We (and our mother, Betty Oostenbrug) loved playing bridge and talking with Rosemary.
Comment Share
Share via:
WO

On behalf of all of us at Walnut Hill, we are so sorry for your loss. We will remember Rosemary fondly as a kind and supportive alumna.

Posted Oct 05, 2019 at 12:00am
Rosemary was always a joy to me. I always looked forward to spending time with her at the Dental Office. She cared about me and what was new with my family. I will always think of her as a Friend, not just a patient.
You will be greatly missed Rosemary
Sharon Brant (Dental Hygienist)
Comment Share
Share via: 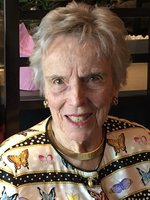