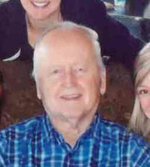 
Paul served in the Air Force from April 2, 1951 to April 1, 1955. He was a member of theBeaverdale American Legion Post 460 for over fifty years. Paul graduated from the University of Pittsburgh with a Bachelor of Science in Mechanical Engineering on June 10, 1959. He then attended and graduated from Notre Dame with a Master of Science in Mechanical Engineering on February 1, 1964. He became a Product and Brake Engineer for the Chrysler Corporation, retiring December 31, 1987. Paul was a crafter and enjoyed making hook rugs, stained glass, to name a few. He was a die-hard Notre Dame Football fan.

Paul will be greatly missed by family and friends. He is survived by one sister, Agnes Zibura of Beaverdale, Pennsylvania; close family friends, Tim and Bonitta Lawson of Cassopolis; and a host of nieces and nephews. In addition to his parents and wife, he was preceded in death by one brother, John Rock, Jr.

Mr. Rock’s remains will be laid to rest next to his beloved wife in Prospect Hill Cemetery in Cassopolis, where he will be accorded full Military Honors.

Arrangements have been entrusted to Connelly Chapel Wagner Family Funerals, Cassopolis.Please share a memory or a message online: wagnercares.com.