To share your memory on the wall of Malik Ballard, sign in using one of the following options:

Malik was a respectful and kind young man with a million dollar smile and dimples. He cherished spending time with his family and friends, especially his nephews. He was an amazing caregiver, until the end, for his older brother. Malik loved playing and watching basketball. He was a talented singer and rapper. He was a 2015 graduate of Ross Beatty High School.

Family and friends will gather Friday, August 28, 2020 from 1:00 p.m. until 3:00 p.m. in Connelly Chapel Wagner Family Funerals, 202 North Broadway Street, Cassopolis. We will then process to Bogue Street Memorial Garden for a graveside service.

Receive notifications about information and event scheduling for Malik

We encourage you to share your most beloved memories of Malik here, so that the family and other loved ones can always see it. You can upload cherished photographs, or share your favorite stories, and can even comment on those shared by others.

Posted Aug 29, 2020 at 01:29pm
I was with Malik and his dad not too long ago. Malik and I did many things together over the years and spent a lot of time together. Malik was a good person. I liked being around him because he was raised right and it showed. I trusted Malik. He was so positive and he was always looking to better himself. We talked a lot and he would share ideas with me that he had. I loved his sense of humor; he was so funny and kept a smile on everyone’s face around. He was someone that everyone wanted to be around. I am going to miss him so much. I can’t believe this.... To his family: I loved him like a little brother and my deepest condolences to you. My heart is broken so I can’t imagine what your family is feeling. – Joshua Simmons
Comment Share
Share via:
AW

Posted Aug 28, 2020 at 06:16pm
I remember when Malik and my brothers and I were younger and we use to play outside together and when he rode his first adult size bike when he was real young he was a funny kind selfless soul who was very talented in basketball, Baseball always a good Funny time. Till we meet again at the cross roads
Comment Share
Share via:
JS

Posted Aug 26, 2020 at 04:54pm
Malik's smile was his signature. It radiated to those around him. Condolences to his loved ones. Heather Burns, former teacher at Cassopolis Public Schools
Comment Share
Share via:
JS 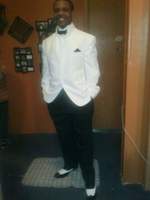