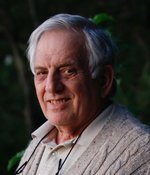 He was born June 26, 1934 in Youngstown, Ohio, the youngest of three children of Domenic and Mary DeAngelis. He married Marianne (his "Daisy") Hackman on November 28, 1959 in Chicago, Illinois.

Beginning as a child of first-generation Americans, Joe worked hard to educate himself so that he could give his children a better life, and guided them by example.

Joe and Marianne raised seven children with the fulfilled expectation that they would all go to college. While living in Lombard, Illinois, they were very involved with the Saint Pius X religious education program. Upon retirement, Joe and Marianne built their home in Harbert, Michigan where he was elected to the Chikaming Township Park Board and created the Chikaming Township Park and Preserve. He was most proud of the Planting Field, the community garden.

Joe was an avid golfer, reader, loved camping and sailing. He never was short of a story or anecdote. His family says he was the worst joke teller ever, but it never stopped him from laughing at his own humor. Joe always demonstrated a genuine interest in anyone with whom he was having a conversation. He was a willful man who to the end lived life his way.

He was preceded in death by his parents; two granddaughters, Melissa Meindl and Morgan Woodard; and one sister, Rosemary LaMarca.

The family prefers contributions be made in memory of Joseph to the donor’s choice.