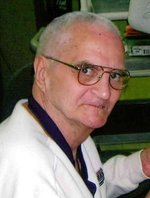 Jack’s hobby was woodworking, especially making toys. He enjoyed camping and traveling. His children remember his trips to Florida, Mackinac Island, and weekend getaways in Plymouth. He was an avid fan of the Chicago Cubs and Da Bears.

Jack is survived by three sons, Jay Vinnedge of New Buffalo, Jerry Vinnedge of Lakeland, Florida and James Brackett of Buchanan; one daughter, Joy Brackett-Rahmlow of Ohio; six grandchildren; five great grandchildren; one sister, Carol Stuckey of New Troy; one brother, Bob Brackett of Missouri; and a host of nieces and nephews.

Along with his parents and wife, Jack was preceded in death by one daughter, Lorie Vinnedge-Teadt; three brothers; and six sisters.

Mr. Brackett will be laid to rest in Forest Lawn cemetery.