To share your memory on the wall of Howard Poehlman, sign in using one of the following options:

He was born April 13, 1917 in Granger, Indiana the son of... Read More
Obituary of Howard Poehlman
Howard Poehlman, 102, of Cassopolis, a dear husband, father, grandfather, great grandfather and brother moved to his heavenly home May 3, 2019.

Howard worked as a mason, also building and helping build family homes. He drove truck for Howard Davis for many years and managed Central Transport trucking before retiring to farming. He loved to fish, hunt and travel. He loved to have a garden and mow his lawn. You could see him mowing his lawn even at age 101. He was a member of Coulter’s Chapel in Niles, Michigan.

He married Jane Marie Fisher March 28, 1942. After sixty-one years of marriage she preceded him in death January 20, 2004. He then married Mary Ruth Hollingsworth December 26, 2004 in Bark River, Michigan. She survives.

Howard will be greatly missed by family and friends. He is survived by his wife, Mary Poehlmanof Cassopolis; daughter, Nira (Tony) Makay of Decatur; son, Bradley (Cindy) Poehlman of Bark River; eleven grandchildren; fifteen great grandchildren; one sister, Lois (Art) Bowman of Cassopolis; one brother, Russ (Juanita) Poehlman of Ocala, Florida; and a host of nieces and nephews.

In addition to his parents and first wife, he was preceded in death by one daughter, Kay Luke; three sisters, Marjorie Carlisle, Doris Sanner, Irene O’konski; and two brothers, Otto Poehlman, Jr. and Lavoy Poehlman.

The family will observe a private remembrance.
Read Less

Receive notifications about information and event scheduling for Howard

We encourage you to share your most beloved memories of Howard here, so that the family and other loved ones can always see it. You can upload cherished photographs, or share your favorite stories, and can even comment on those shared by others.

Posted Oct 29, 2019 at 12:00am
Howard was a grand Gentleman, in the strictest terms.
He always greeted me with a smile in church and at Walmart when we happened to meet.
He and his wife were generous to me, once giving me a pie at a church auction.
I haven't seen Howard since I left the church a couple of years ago.
One could only wish to live the long
and glorious life that Howard did. 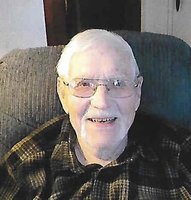