To share your memory on the wall of Frederick Rauch, sign in using one of the following options:

He was born April 22, 1935 in Blue Island, Illinois, the younger of two children of Frederick and Alice Rauch, Sr. He was raised and resided in Mokena, living there for sixty-six years until his retirement. He was part of the family business that had been established in 1922, Mokena Oil Company, and continued as a third generation owner until its sale in 1975.

Fred served honorably in the U.S. Army during the Korean Conflict, and served as Commander of the Mokena AmVets Post. At age twenty-six, he was the youngest person elected to Trustee for the Village of Mokena. He served on the Mokena Fire Department for twenty-five years as a firefighter and EMT, the last eight years as the last volunteer Fire Chief. He continued as a trustee on the Fire Department Board. Fred was elected Highway Commissioner of Frankfort Township, a position he held for twenty-two years.

Fred married the love of his life, Carol Ann Storz June 15, 1958 in Blue Island, Illinois. They were blessed to be able to retire and enjoy their family and friends at their home on Donnell Lake. Fred was the go to guy and was always willing to lend a hand, a tool, or a piece of advice (sometimes whether you wanted it or not). His grandchildren lovingly remember their “Bubba” as their biggest fan, never missing a game or an important event, even flying the Michigan State Flag at the end of the pier. Fred was a great influence to many.

Frederick will be greatly missed by family and friends. He is survived by his wife of sixty-oneyears, Carol Rauch; son, Bryan (Kay) Rauch; daughter, Brenda (Ron) Hilgers; granddaughter, Heather Rauch; grandson, Matthew Rauch; and a host of nieces and nephews. He was preceded in death by his parents and his sister, Dorothy Ann Roesener.

Chief Rauch will be laid to rest in St. John’s Cemetery in Mokena, Illinois where he will be accorded full Military Honors.

The family prefers contributions in memory of Frederick be made to Penn Township Fire Department, Post Office Box 7, Vandalia, Michigan 49095.

We encourage you to share your most beloved memories of Frederick here, so that the family and other loved ones can always see it. You can upload cherished photographs, or share your favorite stories, and can even comment on those shared by others.

I just heard of the passing of your dad, extremely sorry to hear this. I always liked and respected him, he will be missed. Thoughts of people like both of our fathers take me back to what Mokena was like for us growing up. Condolences to your entire family and Mokena as well, both have lost a great influence.
Comment Share
Share via:
MZ

Posted Aug 03, 2019 at 12:00am
Fred will certainly be missed on Donnell Lake. Our sincerest condolences to Carol and the rest of their family.
Comment Share
Share via:
KR

Posted Aug 02, 2019 at 12:00am
So very sorry to hear this news... I have many memories of Fred. Thoughts and prayers are with you all during this time.
Comment Share
Share via:
BR

Posted Aug 02, 2019 at 12:00am
I'm so sorry for your loss. Your whole family are just wonderful people, and that started with Fred. I'm glad you came to Donnell Lake; the lake community is better because of it. My family extends its condolences.
Comment Share
Share via: 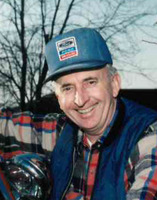