To share your memory on the wall of Elsie Loux, sign in using one of the following options:

Provide comfort for the family of Elsie Loux with a meaningful gesture of sympathy.

She was born September 25, 1937 in Detroit, Michigan, the older of two children of Robert and A... Read More
Elsie Ann Loux, age 82, of Cassopolis, died peacefully early Tuesday morning, April 7, 2020
in the comfort of her family’s presence.

She was born September 25, 1937 in Detroit, Michigan, the older of two children of Robert and Ann Knight. She married William Clarence Loux February 4, 1956 in Cassopolis, Michigan. He preceded her in death in 2014.

Elsie loved her family. Living on Donnell Lake and raising her family there was a wonderful part of their lives. Elsie worked a variety of jobs in different service industries and was particularly proud of what the Cass County Council on Aging accomplished.

Elsie will be greatly missed by family and friends. She is survived two sons, William (Susan) Loux II of Cassopolis, Mark Loux of Fort Worth, Texas; four grandchildren, Julia (Marcus) Curran of North Carolina, William (Stephanie Potocny) Loux III of Chicago, Samantha (Sean) Grant of Detroit, Tyler Loux of Fort Worth; three great grandchildren, Jordan Curran, Morgan Curran, Oliver Curran; one brother, Robert (Bonnie) Knight Jr. of Niles; and a host of nieces and nephews. In addition to her husband, she was preceded in death by her parents and one great grandson, Ethan Curran.

Family and friends will gather on a date and at a time to be announced. Mrs. Loux’s remains will be laid to rest beside her beloved husband in Oakdale Cemetery in Vandalia, Michigan.

The family prefers contributions in memory of Elsie be made to Cass County Council on Aging, Post Office Box 5, Cassopolis, Michigan 49031.

Receive notifications about information and event scheduling for Elsie

We encourage you to share your most beloved memories of Elsie here, so that the family and other loved ones can always see it. You can upload cherished photographs, or share your favorite stories, and can even comment on those shared by others.

Posted Apr 13, 2020 at 04:13pm
Dear Friends
I worked with Elsie at CCCA and we became dear friends to each other. She was always so helpful, and so very kind. I looked up to her as a friend and mentor. I never had a grandmother, and all the times that we would talk. It always came through what a amazing Grandma she was. And I said when I become a grandma I'm going to be like Elsie. And I have a amazing relationship with my Grandkids and I attribute those relationship from Elsie Guidance. The world has a little less sunshine, because of her passing. I just wanted the family to I'm praying and thinking of you during this difficult time. God bless
Comment Share
Share via: 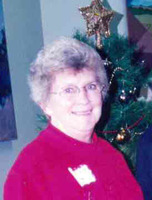