To share your memory on the wall of Don Goodenough, sign in using one of the following options:

Receive notifications about information and event scheduling for Don

We encourage you to share your most beloved memories of Don here, so that the family and other loved ones can always see it. You can upload cherished photographs, or share your favorite stories, and can even comment on those shared by others.

Posted Apr 20, 2019 at 12:00am
Mrs. Goodenough & family, You are all in my thoughts and prayers. I grew up knowing Mr. Goodenough has a kind, giving person. He always had something that needed to be done, but would always take time to help a friend or neighbor in need. May God provide peace and comfort during this difficult time.
Comment Share
Share via:
DF

Posted Apr 17, 2019 at 12:00am
We are so sorry to hear of Don's passing. He was a great man, always willing to help someone out. Our thoughts and prayers are with the whole family.
Comment Share
Share via:
JG

Posted Apr 17, 2019 at 12:00am
Ann & Family, Please accept our deepest sympathy st this most difficult time. I have always thought so much of both you and Don and the entire Goodenough family from way back in my childhood. Thinking of you and remembering you in prayer.
Comment Share
Share via: 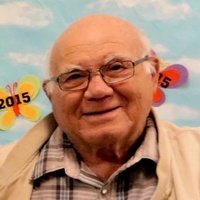