To share your memory on the wall of Dominic D'Angelo, sign in using one of the following options:

Dominic enlisted in the United States Army and was placed in the 101st Airborn as a paratrooper to serve his country during the Vietnam War. After his return he worked with his late uncle, Jon Lewis, in the family's well drilling business.

Dominic married Gretchen Hawthorne on January 10, 1980. Together they had four children. Dominic later worked for Conrail as a yard man and eventually became a Conductor. He retired from the company in 1996.

Known to his friends as "DD," he enjoyed hot rods, drag racing, watching movies, and spening time with his children.

Dominic will be greatly missed by family and friends. He is survived by his daughter, Danielle D’Angelo of Milwaukee, Wisconsin; three sons, Justin D’Angleo of Las Vegas, Nevada, Kristoffer D’Angelo of Elkhart, Indiana, Robert D’Angleo of Vandalia; and one granddaughter, Isabella D’Angleo.

He was preceded in death by his parents and a grandson, Michael Schram.

Family and friends will gather to lay Mr. D’Angelo’s remains to rest at 1:30 p.m. Wednesday, August 7, 2019, in Fort Custer National Cemetery, 15501 Dickman Road, Augusta, Michigan 49012, where he will be accorded full Military Honors.

We encourage you to share your most beloved memories of Dominic here, so that the family and other loved ones can always see it. You can upload cherished photographs, or share your favorite stories, and can even comment on those shared by others.

Posted Jul 29, 2019 at 12:00am
I am very saddened to learn of Dominic's passing. He and I went to grade school together in Niles. Mi. I had lost track of Dominic around 1960 when we moved to the country. Unbelievably we met again in South Korea while serving in the Army in about 1969. Dominic was driving a PX supply truck and stopped at our unit near the DMZ, I happen to notice his name tag and asked if he had any relation in Niles, and to my surprise, it was Dominic. We had a long talk over Coffee and Lunch.
To the D'Angelo Family I send my sincere condolences. May he Rest in Peace
Comment Share
Share via: 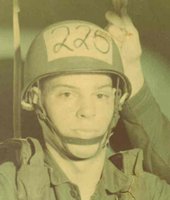