To share your memory on the wall of Barbara Smith, sign in using one of the following options:

Provide comfort for the family of Barbara Smith with a meaningful gesture of sympathy.

Barbara owned and operated her own beauty salon for fifty years in Niles. She was active in Pleasant View Church of Christ in Cassopolis. She had been president of the Howard Community Lions and had sung with the Sweet Adelines.

Barbara had been a resident of Cass County Medical Care Facility for the last four years. She was vice president of the Residents Board. Barbara was a very social person and enjoyed bingo and just about any kind of card game.

Receive notifications about information and event scheduling for Barbara

We encourage you to share your most beloved memories of Barbara here, so that the family and other loved ones can always see it. You can upload cherished photographs, or share your favorite stories, and can even comment on those shared by others. 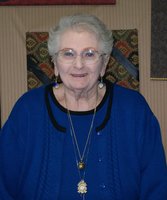