To share your memory on the wall of Ann File, sign in using one of the following options:

Provide comfort for the family of Ann File with a meaningful gesture of sympathy.

She was born July 5, 1934 in Mt. Clemens, Michigan, the thirteenth of fourteen children of George and Anna West. She married James Terrance File March 16, 1957 in Kalamazoo, Michigan. After more than thirty-seven years of marriage, he preceded her in death in 1994.

Ann graduated from Mt. Clemens High in 1953 with honors. She was awarded a scholarship to Western Michigan College to study Physical Education. She met Jim File at Western. 1957 was an outstanding year for Ann: She got married, graduated from college, and gave birth to her first son. She and Jim met many lifelong friends at Western, a pattern which was to follow their entire lives. They moved to Jim’s hometown of Dowagiac where they began their farm life. They moved to their home farm in Vandalia 1959 where they raised their five sons. Ann always had room in her heart, at her table and in her vehicle for one more person. She nurtured and provided for anyone who needed her. Countless people called her mom, grandma, aunt, and dearest friend.

Ann was also very active in the community of Cassopolis. She was involved in church activities, board meetings, fundraisers and social clubs to name a few. It was well known and often said that “if you need to get something done, call Ann File!” Ann and Jim owned and operated “Porky’s,” the landmark eatery in Cassopolis, which is still in the family.

In addition to her parents and her husband, she was preceded in death by twelve of her siblings.

Mrs. File’s remains will be laid to rest in Van Riper Cemetery in LaGrange Township.

Receive notifications about information and event scheduling for Ann

We encourage you to share your most beloved memories of Ann here, so that the family and other loved ones can always see it. You can upload cherished photographs, or share your favorite stories, and can even comment on those shared by others.

Posted Feb 19, 2020 at 11:25pm
It would take pages to put down the memories. Ann and I were roommates at Western, PE majors.
Lived in Spindler Hall, spent most of our time on the old campus. Whenever I reminisce about those college days I remember some of the goofy things that happened. Ann could always be counted on to
Come up with something a little off kilter. Good bye Ann it was great knowing you.
Love ya, Joan(Stout) Fraik
Comment Share
Share via:

Posted Feb 18, 2020 at 07:57pm
As Dan & I are in Arizona, we will be unable to talk to the family. Please know that your family is in our thoughts & prayers. So many fond memories of Ann & her family. I hope your memories will give you strength during this sad time.
Lois & Dan Owen
Comment Share
Share via:
RM 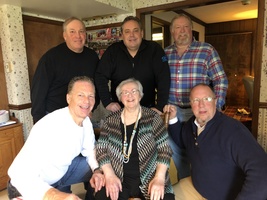